As with most of us in the car hobby our first association with it was through the building of models before we were old enough to drive legally. I started out with airplanes, and then changed to cars when they became more interesting. I never liked ships. I still like aircraft but cars are my consuming interest here.

Where I grew up, all the boys were in to cars of some kind and I was no different. It was the fifties after all and hot rodding was the big deal. I think the very first ones I built were the small scale Revell plastic kits.

Monogram had a larger 1/24th scale size and later on when the first AMT  models kits  came out  they were the must haves. Most of mine that survived are the AMT three in one kits. There were several others such as Jo-Han  which was very poor quality and Lindberg  which was a little better. At one time I had several of the early and late model Corvair kits by AMT. 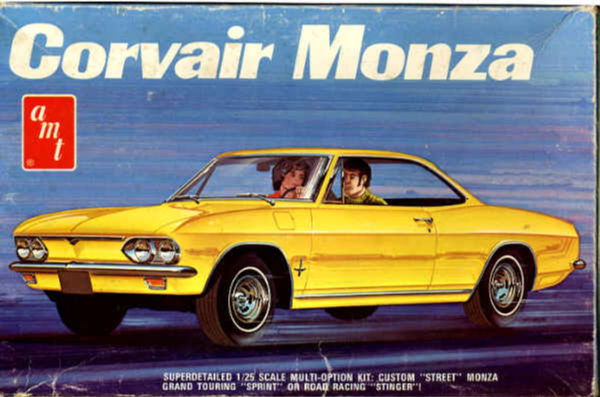 One of the survivors is this  64 model which I wish I hadn’t customized but,  who knew?

Of course I have a few of the new issue Corvair model kits in my collection now but only one is built. Actually, all of my models that survived were a direct result of my giving them away to a friend of mine’s younger brother as I was going away to the military. I had completely forgotten about them until years later when by accident I ran in to him and he asked if I wanted my old models back. At first I didn’t understand but he explained that his mom had boxed all the models up and stored them when it was his turn to join the military. Obviously I said yes and now they are back in my possession. Time and lack of care had taken their toll but I have repaired  some of them and kept them as I had originally  built them. I have others waiting patiently in a drawer when I have time, but I barely have time to build the real cars anymore!

Back before I had a real V8 Vair I built a model of one from a reissue 69 kit. 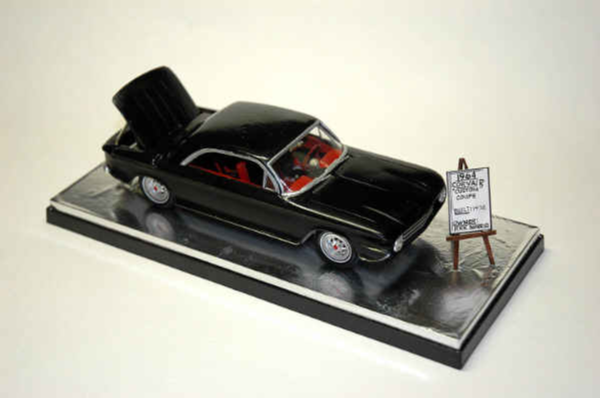 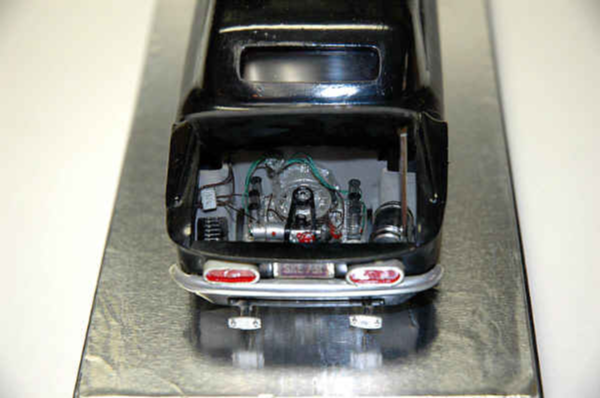 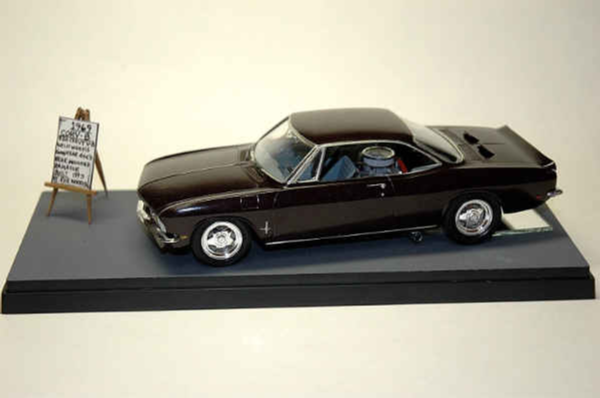 As you can see in these pictures one entire wall of my home office is covered with shelves displaying my die cast  collection and other models . 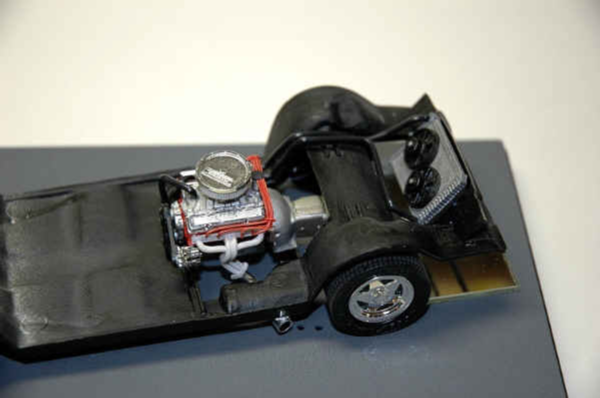 Yeah, I cut up a 69! At the time I thought I was going to put the radiator in the rear  but that didn’t happen with the real car. 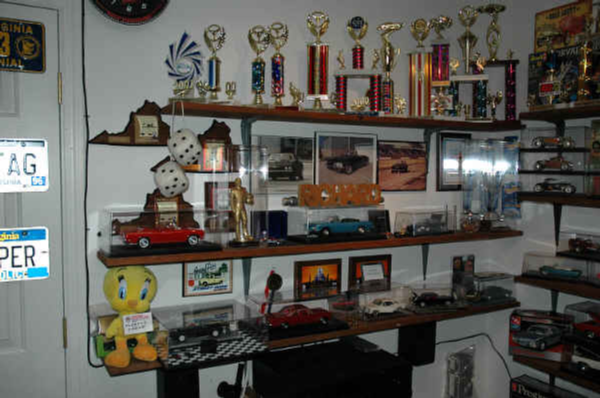 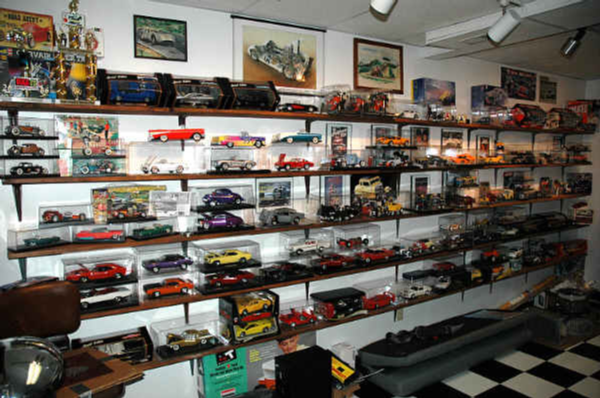 The 65 in a diorama  was my old autocross car. While I was living in Charlotte NC a younger brother of a friend and fellow racer built this model as birthday gift to me. The pictures in the back ground are of the actual car. The photo on the left was taken at an autocross at Charlotte Motor Speedway in 1974. It appears elsewhere on this site as does the other photo from the autocross at the 1972 Corvair Convention in Washington D.C. The model has survived and I made several improvements on it. 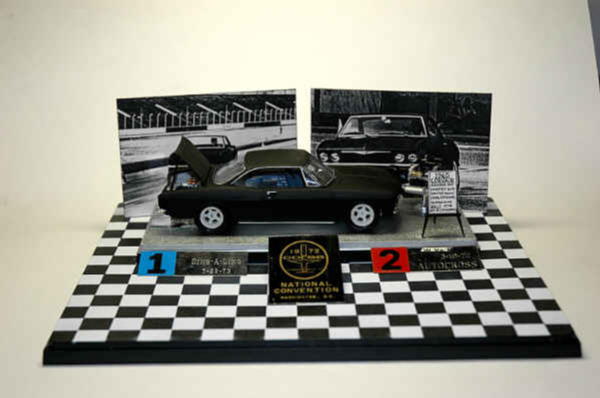 I have entered this model along with the V8 Vair in several Convention model car Concours and they usually place well. 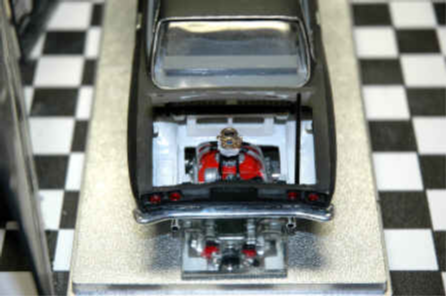 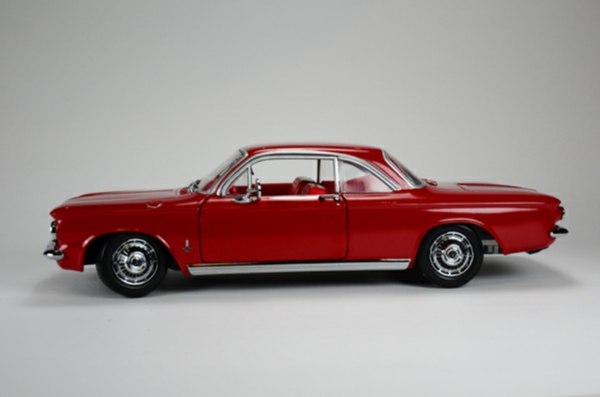 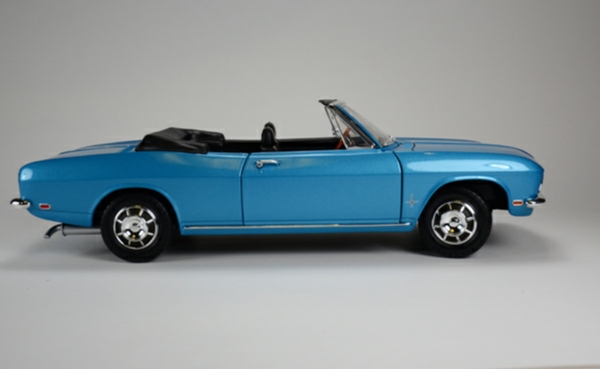 One other die cast model was taken apart and the powder coat paint removed to build (in progress) a copy of my ‘67 Monza convertible. 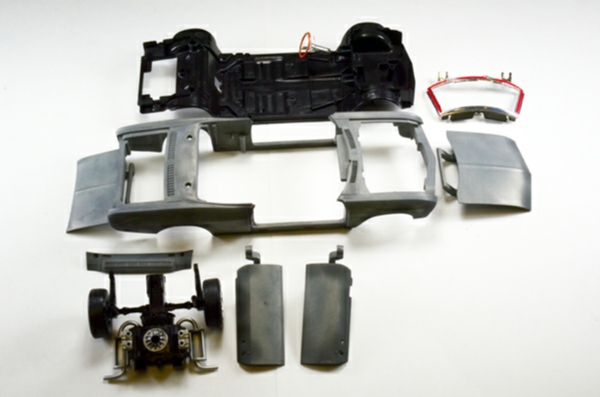 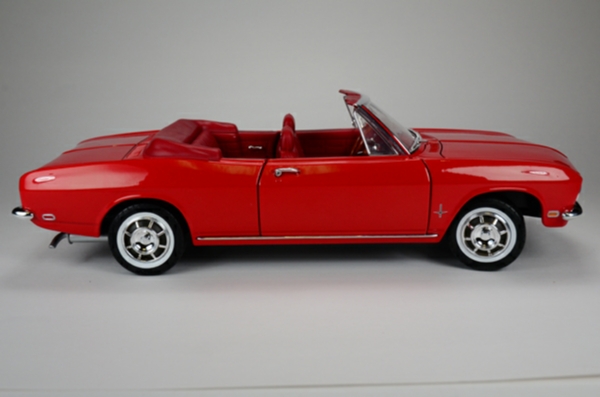 In the 1/24th scale category, I have one very nice 1960 Franklin Mint Monza coupe. 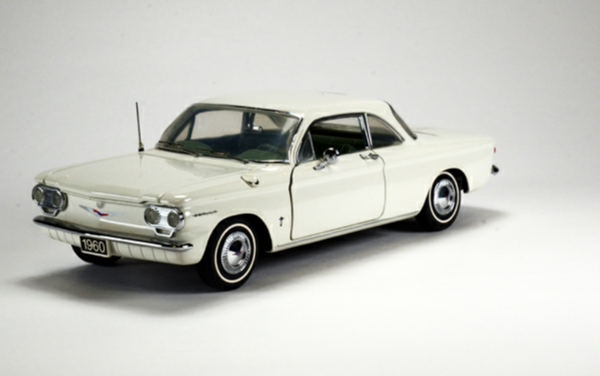 I also picked up my one and only dealer 1/25th plastic scale model in a 1962 coupe which was obviously owned by a kid who played with it as it has issues. 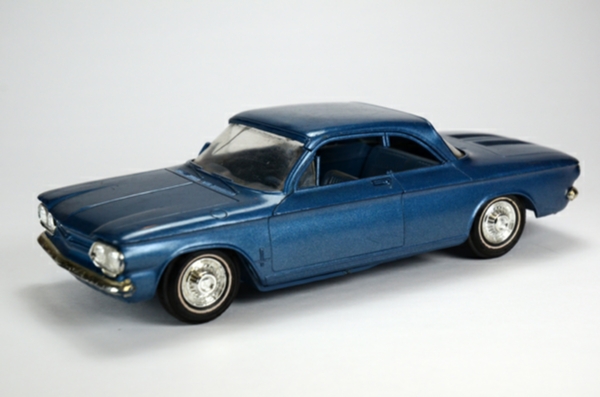 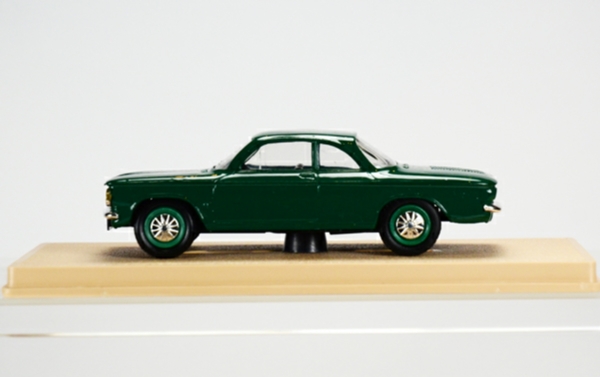 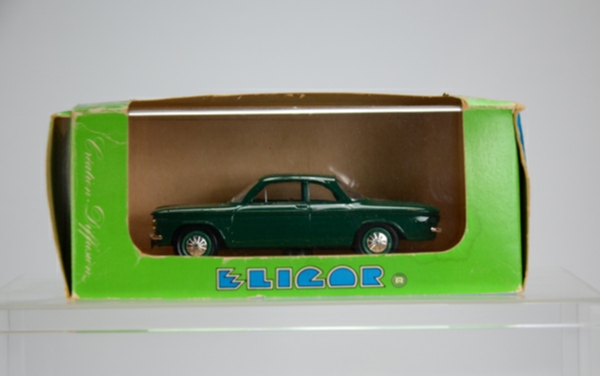 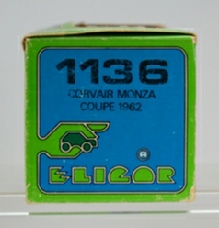 I own one Corvair slot car by Tootsie Toy, I believe. No track, just the car. 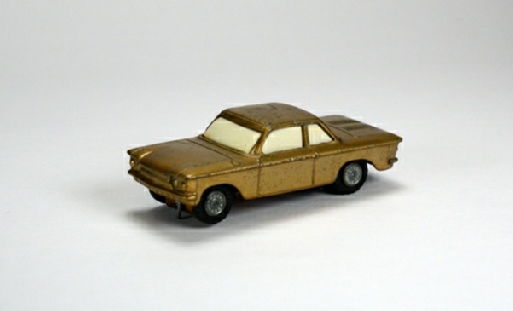 I have four Hot Wheels Vairy8’s. One is a custom made for me by my step brother.

One is called Da Fuzz. 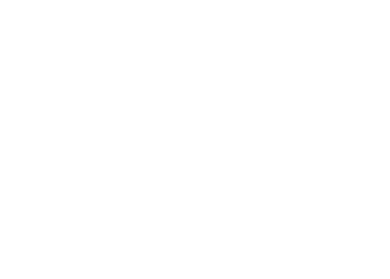 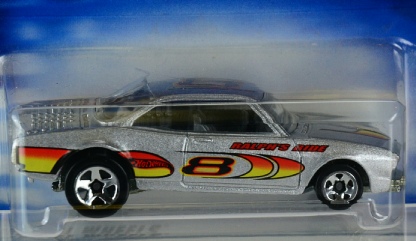 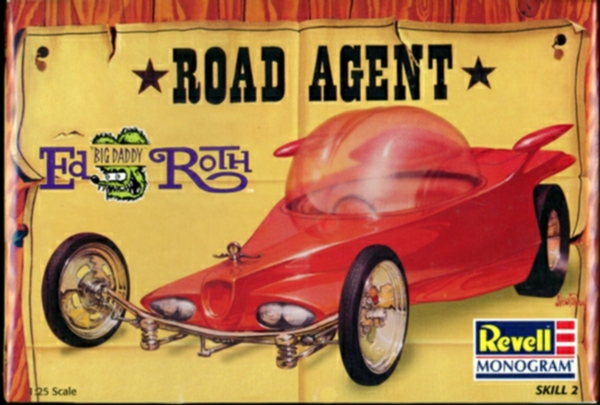 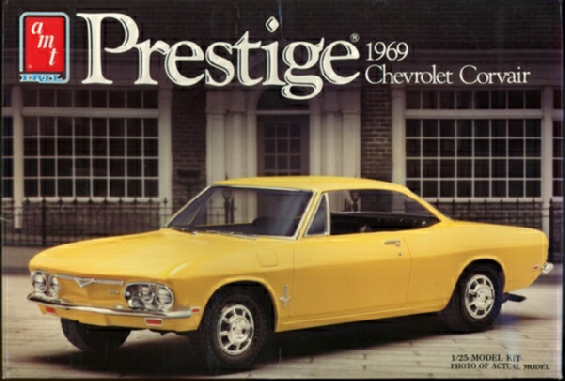 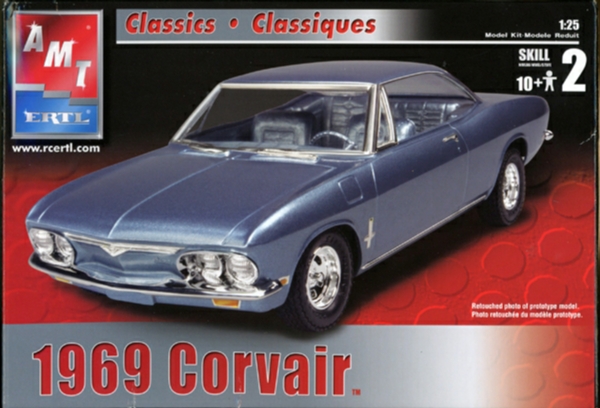 I have one Racing Champions 1960 Corvair Coupe. 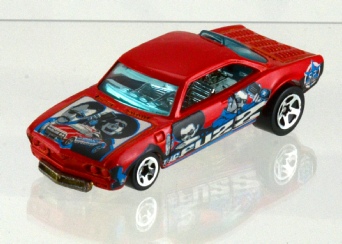 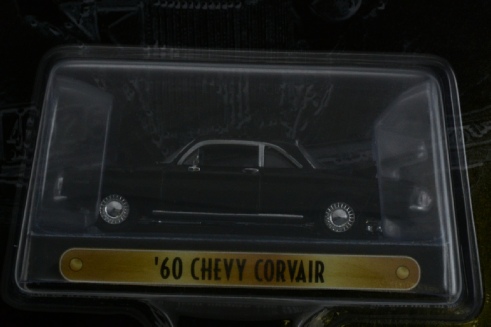 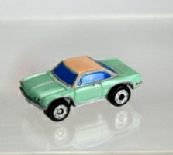 I have two Corvairs from the MICRO MACHINE PLAY SETS. They were originally made by GALOOB, which is now owned by HASBRO. They are slightly larger than N scale.  I had a modler friend of mine make one to look like my “66 Crown mid-conversion which I had made into an earring. 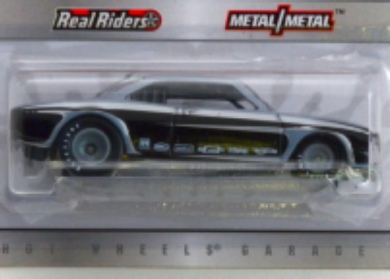