Thirty-two Corvairs from all over the nation and Canada entered the first annual CORSA convention slalom. The course was fast and furious and left no doubt in anyone's mind that the Corvair is a kick to drive. Much to the dismay of Byron Block of the Nader's Raiders group, not a single car turned over. We give special thanks to Larry Claypool and Norman Sprod, who ran in A/Stock, for providing 360 degree doughnuts and other unexpected happenings for the benefit of the press and Mr. Block. We also want to thank Al Harris, Tony Kestian and Curt Shimp for the administration of this event. While we are sure the event was not as perfect as some would have liked it, we keep in mind that this is the first time such an affair has been organized and now we have the basis for establishing rules and classes for future conventions. Thank you for coming and we will see you next year.

(Note: Bryon Block was one of the speakers at the banquet.)

* Denotes fastest time of the day

The very first CORSA (Corvair Society of America) National Convention was held in the Chicago area in Arlington Heights, IL at the Arlington Park Horse Track Hotel in 1971. There were Corvairs from all over the nation and Canada in attendance.

I was then the first president of CORSA, shown here with Diana Brodman  of the Chicagoland Corvair Enthusiasts. Diana was the chairman of the first convention.

The car show was held the same day alongside the autocross on the horse track parking lot. This area was about a mile or so from the hotel. One has to remember that the first convention was a weekend affair, held on July 24th & 25th. Most of the activities happened on Saturday.

Results from the CORSA Convention Concours 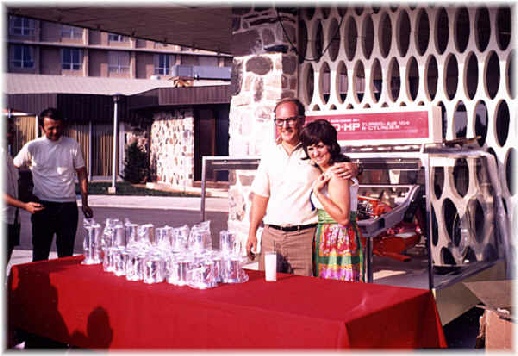